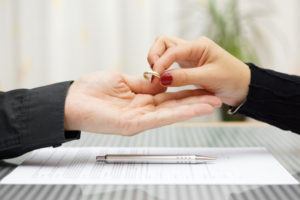 Whether or not a married couple has separated is a question of fact. If one spouse moves out of the matrimonial home and lives separately and independently then that couple are separated. They do not need a certificate to confirm the separation and they will each be treated by the State as single, assuming that they have not left to live with another adult.

There has to be a conscious element to a legal separation. There is no separation if one spouse remains in the matrimonial home whilst the other spouse is working on a project abroad unless the marriage also broke down before the spouse started working abroad.

A couple can have separated although they continue to live in the same house. For this to be the case they have to have concluded that their relationship is over and to live in separate “households” i.e. stop sharing their lives and living arrangements. Such a period of separation can count when calculating the periods of either two years or five years separation that can be used in divorce proceedings as “facts” which establish the irretrievable breakdown of the marriage.

The parties can, if they wish, formalise an agreement reached on separation by entering into a Deed of Separation. This is a legal document that records the arrangements which the couple have agreed upon. Alternatively, the parties can obtain a Judicial Separation. This is a process similar to divorce but which leaves the couple legally married. The prime purpose of such procedures is not to ratify the separation but to record consequential provisions, usually in relation to finance and children.

Getting a judicial separation

Additionally, you do not have to prove that your marriage has irretrievably broken down. But you will have to give a reason for your judicial separation. These are the same as a divorce, namely adultery, unreasonable behaviour, living apart for two or five years, and desertion.

You must then fill in a Judicial Separation Petition. If your ex does not defend the judicial separation, you can then apply for a Decree of Judicial Separation. This is the only decree required, unlike in divorce, where there are two.

Once the Decree of Judicial Separation is issued by the courts, you are legally separated. This does not mean that you can marry other people. But it does have very similar implications as a divorce in that :

• You are no longer obliged to live together
• Any gifts or bequests left to your spouse in your Will shall fail, unless you make a new Will stating otherwise
• With the exception of your pension pot, all matrimonial property can be divided as the courts see fit
Why get a judicial separation?

• The religious beliefs of one or both people prevent a divorce from taking place
• The marriage has not yet lasted a year, meaning a divorce is not possible
• One person has developed an illness and divorce does not seem like the right option
• The couple require time to work out whether they really want the marriage to end

Our Client Benefits Include:

Request a Call Back

Thank you very much for your help over this matter. Considering how difficult I had found previous solicitors, both with giving me accurate information and not responding or doing anything without several reminders, it was very good to have your support and proficient service. I particularly appreciated having written details from our first meeting. It is impossible to remember everything when you're thrown into a stressful situation. I felt very reassured and that I could rely on you to give me the information I needed and to deal with things very quickly. Divorce is never easy but it went through as we had hoped, smoothly and without greed or aggression on either side. Now it is over I feel that I can get on with building my new life. I have already recommended you to friends.

This is a widget ready area. Add some and they will appear here.